The monthly Cultural Evening on Friday 25 November at 18h30

The monthly Cultural Evening on Friday 21 October at 18h30

The monthly Cultural Evening on Friday 16 September at 18h30

The Cultural Evening on Friday 19 August

The Cultural Evening, on a cold night, on 17 June was well attended. In preparation Vivaldi’s Winter was playing on repeat. Glühwein, made of cranberry juice and freshly squeezed orange juice with spices, tasted like the real deal; a warmed quiche; pizza bites and an assortment of other nibbles invited in the participants. After eating heartily, especially of a hot Winter’s soup: carrots, turnips, parsnips and other wholesome vegetables made by our resident in the East Manse, Robert Sprenger, everyone settled into an hour of winter poetry. There were a few poems of winter snow but most of the readers brought poems that more closely reflected our experience of winter and a few represented the winter of the soul sense rather than the season of winter. We listened to South African poets, African poets, and Western poets. Eventually, we peeled ourselves away from the warmth of a gas fired heater and the invigorating stimulus of the poetry, finished the ‘good food’ and departed for home. 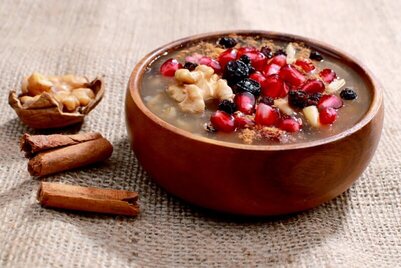 Ashure or Noah's Ark pudding
The Cultural Evening on Friday 22 April explored the culture of food. We delved directly into the culture of food with foods of antiquity. Michaël Merle shared two dishes that have a connection to the Old Testament. Michaël shares: “At the cultural evening focused on food we shared and ate two traditional middle eastern dishes: Ashure pudding and Ma’amoul biscuits. Ashure (or “Ten” which could either indicate 10 ingredients or the idea of a complete meal) is a chickpea and bean based porridge with dried fruits, nuts, rosewater and pomegranate seeds (rubies). It is the oldest known recipe to still be in use today and is referred to as Noah’s pudding. One traditional story is that it is made from the ingredients that Mrs Noah had left over once the ark landed on dry ground. It remains a popular dish in many parts of the middle east, particularly in Turkey. Ma’amoul biscuits are a form of shortbread with a sweet date paste inside. It is often made with nut (almond) flour and the date paste is referred to as “honey”. The reference to a land of milk and honey is thought to refer not to the honey made by bees but rather to the sweetness of date paste or date syrup. Following this thought, the food that sustained John the Baptist is also considered in some traditions not to be literally locusts and honey but rather the fruit-meat inside the carob pod (locust fruit) and date paste (honey).  Ma’amoul biscuits are the traditional end-of-the-fast biscuits. They remain a popular Easter and Eid al Fitur biscuit in the middle east, thereby uniting Christians and Muslims in their respective traditions at the end of Lenten time and Ramadan.”

The culture of the evening was side-tracked with the consideration of terms given to cousins and nephews and nieces in various languages and whether this made communicating familial relationships easier or more complex.

Others shared stories of their mother’s favourite food and there were descriptions given or read about extraordinary meals. Throughout, the Ashure pudding and Ma’amoul biscuits kept everyone well fed.

Report on the Cultural Evening of Friday 18 March

The evening brought a regular group of people together who brought a range of sayings, poems and stories by the 13th century Persian poet Rumi. Some in the group have made an extensive study of Rumi while for others it was a relatively new encounter. Some of his story and inspiration were read and some of his stories were heard, to musical accompaniment, from a recording.

The story that opened the evening had been shared with the trustees a couple of days earlier: A man is searching for keys he had lost, under a streetlamp. A friend walks by and asks what he is searching for and then joins in the search for the keys. After a time the friend asks: “Mulla, are you certain you lost your keys here?” to which Nasrudin responds: “No, I lost my keys at home.” “Why then are you searching for them here?” “The light here is better.”

We listened to the Rumi story of the man who had lost his camel and then Michaël told his version that he had prepared for a school assembly. A man’s friend loses his camel. The man wished his friend to feel that he cares, so he says that his camel too is lost. Both go in search of the two camels until the man’s servant comes to report that indeed his camel is lost. The man then only truly feels the feeling of his friend at the loss of his own camel. Once both camels are retrieved the man confesses his falsehood to his friend. The friend had recognised his falsehood immediately because his responses seemed disconnected from the loss of a camel.

Great wisdom is contained in the prolific writings of Rumi that still hold true today.

Report on the Cultural Evening on 21 January

​The Cultural Evening on 21 January raised thought-provoking questions on the subject of the human condition and relationships. We watched an episode of a BBC series made in 2020 of monologues written by the British playwright Alan Bennett. These monologues were first written and performed by top-class actors in 1988 with a second set written and performed in 1998. The remake of these, plus a few new monologues, suited the restrictions of COVID.

We watched Soldiering On played by Harriet Walter as Muriel Carpenter, a woman who has just been left a widow. She was a 'pillar of society' and her husband left her well off. But she had never managed the finances before so she relies on the son. Slowly we discover that all the relationships in her life are not as she described them early on. Her son uses all her money in hair-brained schemes and loses it all plus the money of lots of other people. Her husband was not the moral man she assumed and her daughter was not mentally ill, but recovering from trauma. Her friends were only there because of what they could get. But she is "not a tragic woman" and keeps soldiering on, although she would like to find a community to which she could belong.

We discussed the human condition and relationships based on the movie and in the light of poems and songs that some of those present shared.