a talk by Rev. Michaël Merle on Sunday 23 January at 11h30.
​
An Epiphany talk that will consider the significance and relevance of the First Miracle: The Changing of Water into Wine at the Wedding Feast at Cana.

The True Nature of The Second Coming

This focus will begin with the sending out of a PDF of the collection of articles and extracts on this theme from the work of Hans Werner-Schroeder. To introduce the theme there will be talks on two Sundays. These talks will be summarized on the News page of this website.

We hope that small groups will be created to read through this and study it together over the course of the year (September 2021 to September 2022).

As these small study group initiatives begin to form Rev. Michaël Merle will present two lectures and other general perspectives by Rudolf Steiner to help inform and stimulate this year long study.

Digital copies of the book of articles and extracts on this theme from the work of Hans Werner-Schroeder are available from the church office.

In March the job that sustained Andreas and his family came to an end. This had been anticipated for some time. It was thought that then Andreas would look for some part-time work, so as to also have the time needed to focus on his studies and hence not prolong his training even further. With the Covid-19 situation, finding such part-time work has become much more difficult. So, in order to give him the time he requires for his studies, it is now advisable that Andreas devout his full attention to the path of priestly preparation. This requires that, as part of supporting priestly training, funds be made available to support him and his family.
​
The Africa Seminary has therefore set up a dedicated fund for this purpose. If Andreas is able to concentrate on his studies now, we hope that the completion of his priestly training can happen all the sooner.

Any regular contribution or donation to this fund is very welcome and will make a big difference to sustaining the future of our communities.

We appreciate if you share this request with others who might have a heart for this impulse. Thank you.

For the bank account fontanct the church office on joburg@thechristiancommunity.org.za or +27 11 789 3083.

​Information on The Christian Community 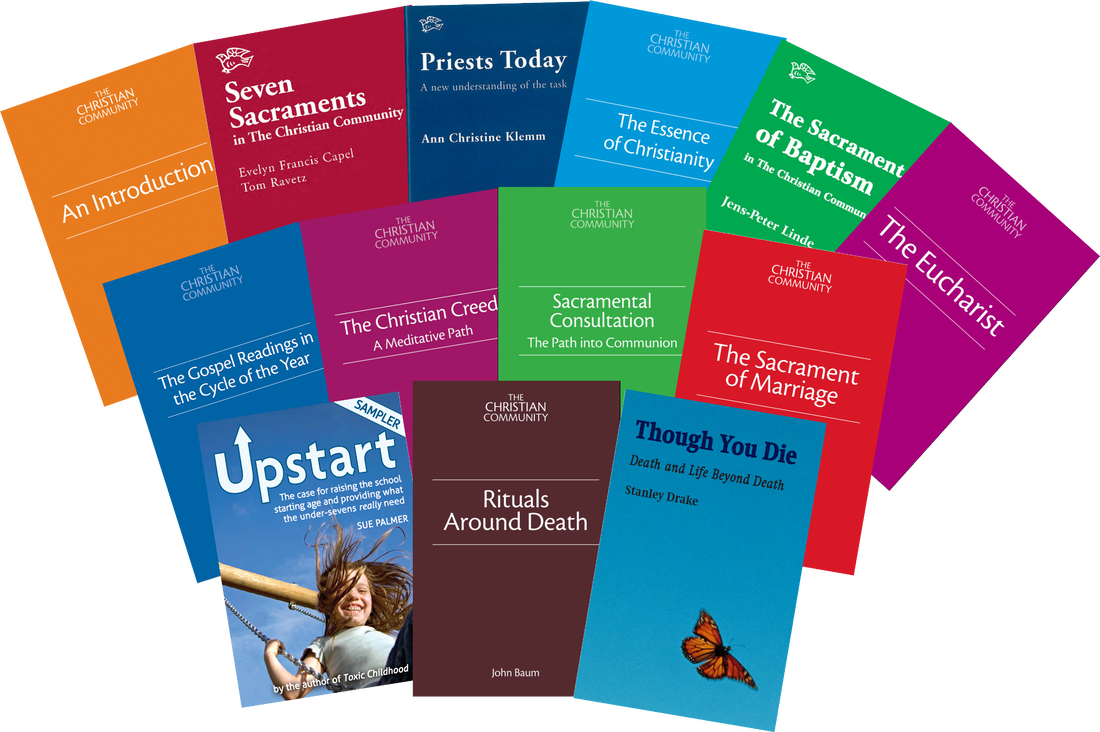 The booklets illustrated above have been published to help people understand something about The Christian Community; how it is a movement for religious renewal, how it differs from other Christian churches and how it offers something for everyone with existential questions. Each title is an entry point that may provide answers to something that is important in your life, but, hopefully, also raises more questions that may lead you to investigate us further.

Each title is available free of charge as a pdf through the webmaster (request the title you are interested in) or as an ebook (in most e-reader formats) directly from the publishers website. ​ 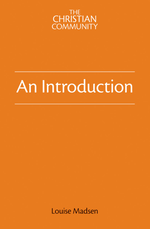 We live in a secular world. Religion, in any form, is foreign to most people. And yet many people sense that there is more to the world than meets the eye, not only on an emotional or psychological level, but especially on a spiritual one. For those looking for a more meaningful and fulfilling life, a modern form of Christian religious life can be a great help in finding a new relationship to the divine world.

The Christian Community is a movement whose aim is to renew religious life. It does not do so by attempting to revive any previous practices. On the contrary, it works out of a heightened awareness of the necessity for a world view with an intrinsic spiritual dimension as basis for any real religious activity. It is this that makes the services, as they are celebrated in the Community, new. The spiritual quality, evident in all the services and sacraments, reveals something of the fullness of the invisible, divine above us. 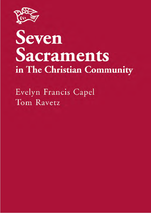 This little book answers questions about the seven sacraments as celebrated in The Christian Community movement for religious renewal.

Who takes part in the Act of Consecration of Man? What is used in Baptism? What is done in Sacramental Consultation? What happens at the Ordination of Priests?

The text of these rituals is never printed or read by the congregation - they are there to be heard and experienced. These descriptions are intended as a guide and introduction for those who wish to attend the services. 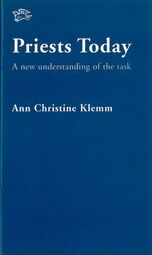 The Christian Community, a movement for religious renewal founded in 20199, has clearly outlines forms of sacraments which are continuously given new meaning our of each individual's understanding. These sacraments requore priests who have dedicated themselves to this task.

This booklet describes the spiritual background of priesthood, the Ordination service, the tasks of priests in celebarting sacraments, teachin and pastoral care, and it explores the relationship between priest and congregation.

Ann Christine Klemm, born in 1954 in Oregon, studied languages and history of art, She has worked as a priest in Germany, Ireland , and now in England. 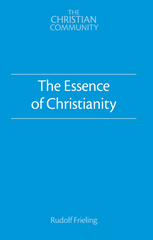 Frieling’s pithy style condenses into a few pages the riddles of the human being, the creation of man, the Fall, freedom, and redemption through Christ. This positive approach is an antidote to modern pessimism regarding the future of humanity.
​
Rudolf Frieling was born in 1901 in Leipzig, Germany. He studied theology and philosophy and was among those who founded The Christian Community in 1922. He was its leader from 1960 until his death in 1986. His other works include Christianity and Reincarnation; Hidden Treasures in the Psalms; Old Testament Studies and New Testament Studies. 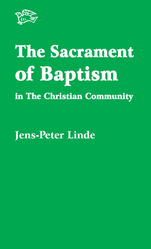 This booklet describes Baptism in the renewed sacramental life of the Christian Community.

The choice of godparents and their task, the use of the three sacramental substances — salt, water and ash — are described. 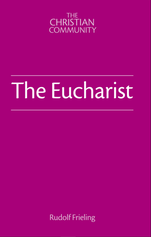 The Eucharist evolved out of the Last Supper, the ritual of the Mass. Frieling examins the archetypal structure of Gospel reading, Offertory, Transubstantiation and Communion, as well as describing the development of the early Christian service into the Mass, the reaction of the REformation, and its renewed form in the Act of Consecration of Man.

Rudolf Frieling was born in 1909 in Leipzig, Germany. He sstudied theology and philosophy and was among those who founded The Christian Community in 1922. He was its leader  from 1960 until his death in 1986. His other works include Christianity and Reincarnation; Hidden Treasures in the Psalms; Old Testament Studies and New Testament Studies. 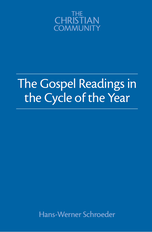 Behind the highlights of the festivals of the Christian Year, there is a series of readings from the gospels which are used in the Act of Consecration of Man, the Communion Service of The Christian Community. Deeper study of these readings reveals a composition which has nothing arbitrary about it. Motifs develop and grow from week to week; even the particular gospel from which a reading is taken is expressive of an aspect of the events it describes.

What emerges is a new gospel, taking its content from the other gospels, but living in time and in the rhythm of the Christian year. Hans-Werner Schroeder shows how this gospel expresses the life of Christ, which was a unique historical event, as a living reality within the course of every year. 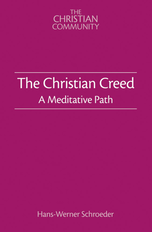 In the Eucharist service of the Christian Community, the Act of the Consecration of Man, a new form of the Creed is read. Paradoxically, it does not begin with ‘I believe,’ but rather is something which can become a source of faith through understanding.

Hans-Werner Schroeder takes us step by step through the Creed, explaining it as a spiritual path which can truly transform us. This is an essential book for members of the Christian Community, and will also be of interest to all those searching for spiritual foundations.

Hans-Werner Schroeder, born in 1931, is a priest of the Christian Community. He teaches at the seminary in Stuttgart and is the author of The Cosmic Christ, Necessary Evil, The Trinity and The Healing Power of Prayer. 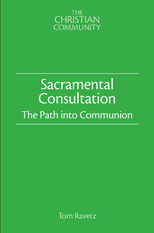 What can the renewed sacramental life of The Christian Community offer to those who seek pastoral care?

Describing Sacramental Consultation as practised in The Christian Community, Tom Ravetz shows how it differs from the earlier form of confession and repentance.

Together with the support of the Act of Consecration of Man, we can be helped to experience a ‘turning’ towards our higher self. Through becoming aware of the reality of Christ’s presence in our souls, we can become empowered to live our lives in a new way, and to live creatively with our problems and shortcomings. 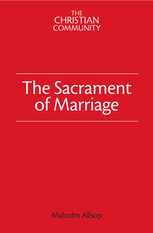 Sharing one’s life with another means the interweaving of two destinies, two paths of life. Through this, the basic element of human community is created. Whilst the decision to marry is a private matter for the two people concerned, the fact of their marriage has the deepest significance for society. Throughout the ages it has been accompanied by some form of ritual. This served to formalise and to raise the decision by calling upon some objective, higher instance to bless the union. Even in our secular age couples often still feel a longing for some kind of ritual or blessing.

Malcolm Allsop explores questions around the potential of human relationships: younger couples setting out on a shared path, older couples with more experience of the challenges of relationships, same-gender couples, and the length of a marriage. The significance of the step to marriage becomes clearer and brighter, as does the role of the marriage ritual of The Christian Community in bringing purpose and meaning to this step. 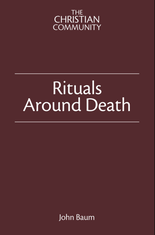 This booklet describes the sacraments of The Christian Community for those who seem to be near death, as well as the rituals which can be held for a person who has died.

The Sacramental Consultation is a personal consultation with the priest that has a sacramental conclusion. Holy Communion can be received at the bedside. These can be of help for someone nearing the threshold of death before receiving the Anointing.

After death there is a funeral in two parts, and the Act of Consecration of Man for the Dead can be held on a following Saturday. This is the regular Communion Service with special prayers to help the deceased on their path in the life beyond death.​ 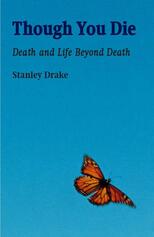 Death is a certainty that affects us all, and that every human being has to face.

More is known about human death than many people realise. A growing number of people have felt themselves to be on the brink of death, and having ‘an out-of-body experience.’ Some of these people feel they have actually chosen to come ‘back to life’ after hours on the operating table.

The spiritual insight of Rudolf Steiner shows distinct stages in existence after death. Above all there is the central Christian mystery of death, the full significance of which has not yet been grasped by human thinking and which will only reveal itself as that thinking becomes more spiritual.

Stanley Drake was born in 1906. While working as an accountant in London he met a number of religious groups including The Christian Community which impressed him and led him to ordination in 1939. From 1952 until his death in 1986 he worked as a priest in Forest Row, Sussex. 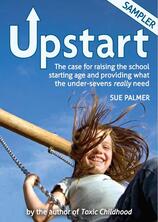 Welcome to the Upstart sampler, a free first chapter of Sue Palmer’s groundbreaking book Upstart: The case for raising the school starting age and providing what the under-sevens really need.

Sue’s aim is to: ‘influence public opinion so that by the next general election the introduction of a kindergarten stage for three- to seven-year-olds is high on the UK’s political agenda.’

This sampler tells you what children and society gain from starting formal education later, and why we cannot afford to brush this need aside. Please be part of the change!

Although certain aspects of this book are geared at the education system in the UK, they may also be relevant genrally.

​UnEarth Your Essence. A Guide to Your Personal Becoming