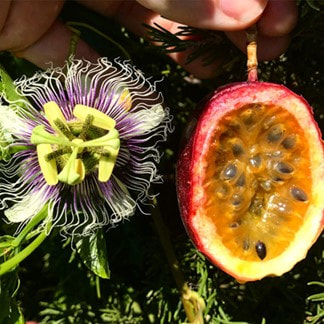 In the early 1700s missionaries in a part of South America (the part that became the country of Brazil today) used a certain flower as a metaphor in the teaching of Christianity. They used the flower as an educational aid to describe the events and experiences of Good Friday: the five wounds of Christ and other emblems of his “passion” (which expressed in Portuguese the Latin passio, which means suffering). The flower known as flor das cinco chagas or "flower of the five wounds" gave the essence of its name to the fruit the flower produced, which we know today as passion fruit (or as it is also known in South Africa: granadilla).

Passion originally meant suffering, although now it is also associated with intense outbursts of strong emotion, ardent desire, and the arousal of great enthusiasm. The term was used for centuries to refer to the week of suffering prior to the glory of Easter Resurrection. What we now call Holy Week was then known, and may still be considered as, Passion Week.
​
The question may arise as to why we do not celebrate Lent, but rather focus on Passiontide? What is the difference? Why do we have four weeks of Passiontide and not simply one week (Holy Week) within the Lenten season? What is new in our approach that seems to extend this week-long intense time into a longer (four week) tide? In the traditional liturgical year of some Christian denominations, Passion Sunday is the fifth Sunday of Lent, marking the beginning of a two week period called Passiontide (the week before Holy Week and Holy Week). In 1969, the Roman Catholic Church removed this two-week Passiontide from the liturgical year, but the day remains observed on the fifth Sunday of Lent in some Christian denominations such as the Anglican Communion and the Lutheran Church. This adds another dimension to our questions: If Passiontide was traditionally a two-week period within Lent, and continues to be so for some, then how did it become a four-week season in the renewed liturgical year within The Christian Community?

Lent (Latin: Quadragesima, 'Fortieth', English: Lent, shortened form of the Old English word lencten, meaning ‘spring season’) is a solemn religious observance in the Christian liturgical calendar of traditional denominations that begins on Ash Wednesday and ends approximately six weeks later, the night before Easter Sunday, or in other traditions on Maundy Thursday evening with the start of the three days: Easter Tridium. The purpose of Lent is the preparation of the believer for Easter. The traditional 40 days of Lent are marked by fasting, both from foods and festivities, and by other acts of penance. The three traditional practices to be taken up with renewed vigour during Lent are prayer (justice towards God), fasting (justice towards self), and almsgiving (justice towards neighbours); these are known as the three pillars of Lent. Self-reflection, simplicity and sincerity (honesty) are emphasised during the Lenten season. In a renewed movement of Christianity, would such emphasis: the justice towards God, self and neighbour (in appropriate form) and a simple and sincere self-reflection not be a year-long reality? Lent is a response to the frivolity and excessiveness of an un-reflected life. The celebrations of Shrove Tuesday, the day before Ash Wednesday, marked by using up the butter and sugar in the house in the making of pancakes and the carnival (literally “putting away meat”) and Mardi Gras (literally “Fat Tuesday”) festivities speak to an old licentious living. As such Lent was a stark reminder, as it echoed the forty day fast in the desert when Christ entered the human experience, that we have to let go of the old ways of unrestrained expression and enter into a new way of self-management. May it be that now we should know this to be the case at all times? Emil Bock well explains the significance of Passiontide (which in its four-week structure reminds us of the preparation that Advent is for Christmas):
Our discipline of preparation is now focused in Passiontide in the sacramental words. The human ‘I’ which in Easter resurrected joy learns to stand upright and ready to receive the Spirit at Whitsun, now is spoken of as prostrate and lamenting. We prepare in a modern way for Easter in the four weeks of Passiontide which also takes us through an ever-deepening sense of our full preparation: physical, etheric, astral and ego.  As Emil Bock describes:

by Rev. Reingard Knausenberger
​
Looking around at the abundance of blossoms this summer in our church garden the lilac Morning Glory which opens and closes with the rising and setting sun caught my eye. Soon after this I watched in amazement, also in our church garden, a large white flower slowly unfurl after sunset as the day darkened and stars twinkled. It was the white Moon Flower, a night bloomer. In both these blossoms a striking five-pointed star appears. Indeed, stars are not just above us, but all around us, clearly inscribed in many flowers. With the flower the secret of stars is also revealed: that hidden in their core is the potential of a new future unfolding, still invisible, but very real in what will gradually mature into the seed.
The Christian festivals of Advent, Christmas and Epiphany have a relationship to the night, to twilight and dawning and stars. Divining comes from twilight – the Christ child birth is celebrated at mid-night when invisibly the setting sun becomes a rising sun – the appearance of the guiding Star of Grace is the epiphany moment which motivated the kings.

All through the 12 Holy Nights of Christmastide the proclamation resounded:
Know this, the Christ has appeared in the realm of earth.
This is how our new year has been ushered in: From the realm of the night, where stars have their home, to where we lift up our soul to recuperate, heal and renew. In its core night also holds a secret, a blossoming epiphany moment to be found only by ‘journeying’ there as the kings did.
​
Let the kings be our guides through this year. What did they take along on the journey? Focused intention, perseverance, an open heart; open to learning from ever changing circumstances. They never wavered in holding their focus on the star, even when it disappeared from sight, so to say, even when they faced invasive darkness, inhuman and destructive. Even in this ‘Herod’ place they upheld their precious gifts of human integrity and never failed to keep seeking, questioning, and focusing on ‘their star’.  Every step of the journey was a learning, a maturing in discernment and comprehension.

Following the example of the kings into every day of this year, we too can and will experience an epiphany moment. Not just one but many, as many as there are stars in heaven. For like they, on earth we now find stars, the Star of Grace as it lights up and shines from human eyes, hands, words and hearts and blossoms in deeds of human integrity. Always moments only of perceiving the source of hope and faith in future new becoming, warming the heart with deep and reverent joy.

We know the journey on earth is through darkness and that we will also meet evil.
We know there are many companions on the way with us, all following the star.
We know Christ has appeared in the realm of earth.
So we know we can and will find our Star of Grace.

The Star of Epiphany 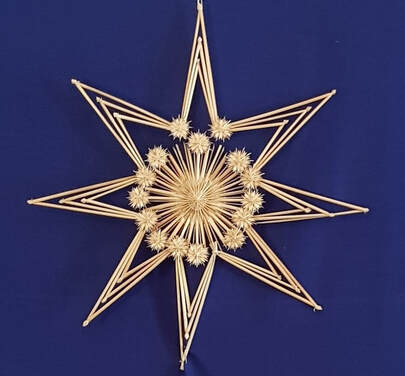 On the night of 21 December 2020, a co-incidence of Saturn and Jupiter on their orbital paths as seen from our earthly perspective engaged many of us in an evening of star gazing. The planets (or mobile - moving- stars as they were first identified) and the fixed stars that hold their position in the constellations of the zodiac that appear to pass over our night skies in the course of the year have held our fascination for eons and eons. They have provided and continue to provide a picture of the unfolding of the cosmos. They are the sign (signature) of the working of the heavenly beings that move and shine for all who seek to see. Many were excited at seeing this Solstice occurrence in our mid-summer of 2020. Certain articles and news broadcasts dubbed it the “Star of Bethlehem”. But can we truly say that this occurrence of the crossing of these two planets, or a similar co-incidence of planetary movement or a comet is the physical manifestation spoken of in Matthew’s Gospel as the star that announces the birth of the child to the magi and guides them to the place where he resides with his mother? Could the wonder of our mid-summer night last month be better called a “Solstice Star”? It did occur on 21 December after all. The date of Christmas (three nights after the solstice) is not disconnected from the reality of the sun experienced as shining over the Tropic of Capricorn (so named for the Zodiacal constellation of this time of year when the sun appears to shine directly above it). There are truly signs in sun, moon and stars, and we can learn to read these in the same way that we can observe seasonal changes in nature. Yet, Christmas carries a significance beyond all time and represents the birth of him who would bear the Christ.

So, what could we make of the Christmas Star? It would be more correct to speak of the Epiphany Star. This celestial light announced a birth that was long awaited by the magi. Magi were priests of the Zarathustran religion. They anticipated the re-birth of their great and wise founder: Zarathustra, whose name means “star-bearer”. It is the light of wisdom (of the Spirit of Zarathustra) combined with the shining presence of Christ in the descent through the heavenly spheres coming to earth and shining down upon the child into which the Christ would incarnate at the Baptism in the Jordan, that the magi perceive with their initiated spiritual vision. Could it be that those not initiated (like Herod) could not see the star and only the truly wise of the world (the magi) could see this heavenly light in the “star” that announces and guides them? This light of the star is pure grace and may be perceived in our illumined thinking and feeling. We need not try to find a physical astronomic event to understand the true reality of this Star of Grace. It is in our renewed imagination and our inspired thinking that we are able to intuit the reality of this cosmic event. The magi in their wisdom saw what truly was. May we in our strivings find in our thinking and feeling souls that same wisdom and hold in our minds eye the light of that Star. For what the star announces is the manifestation of the Christ coming to earth. It is the herald of salvation, the long-awaited turning point of time. May the Star of Grace illumine our thinking and open our spiritual perceptions for the presence of the Etheric Christ, for our current and future turning point. The Coming of Christ today is the coming of Christ in our life sphere and it calls us now to a change of habits and to a renewed thinking. As the Advent pericope foretells:
​
“The evolution of creation continues. Consciousness is evolving. There will be signs in the cosmos indicating the change: Sun, moon and stars will reveal themselves in new ways …

At the same time a new ability is awakening in humanity to perceive the Son of Man and his transforming powers of life – as he rises up the powerful and radiant release from debilitating life patterns and thought forms.” (Luke 21: 25, 27)